Walmart, the company that has been the leader of the Fortune 500 list for nearly a decade straight is the perfect model to demonstrate the future of working arrangements.

Its retail first model means it is one of the hundreds of businesses that can not simply decide to go 100% remote like we have seen notable technology companies such as Spotify do in the past year.

Walmart might depend on minimum wage workers to man its physical spaces now, but will it be possible to be a fully virtual company in the future?

Walmart, like many other companies, is embracing some amount of hybrid work as pandemic restrictions are peeled back, but the amount of freedom workers still have is highly dependent on their job title.

Tech workers had more freedom when the executives were called back to the office this week. Sales associates and floor workers are still expected to in person however as the vaccination requirements were carried out across the country. Walmart has said that the majority of employees have gotten vaccinated.

Although right now it looks like massive retailers like Walmart will be the last to go virtual, the giant has recently unveiled a new ‘playbook‘ to offer new services to customers and add automation technologies to deal with changing customer demands such as curbside pickup. CFO, Brett Biggs states the company will spend 14 billion improving these services, specifically online sales.


Automation in this case doesn’t mean a room full of robots and a person with a tablet, but Walmart has invested in technology that can make warehousing and loading much more efficient across their hundreds of distribution centres. Humans are still in the mix though, and likely will be for a while. But the roles have changed gradually.

When you look at that list you can see the impact that the new automation budget and vision could have on the makeup of this workforce. Walmart is already experimenting with freight automation and other processes exist or are being developed for all traditionally human aspects of warehousing. 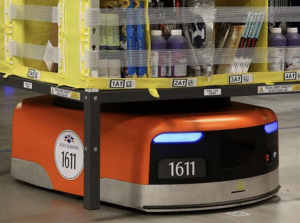 Amazon has robots that take on the role of lift drivers.

Who could be in the store?

Even Walmart a giant in supply chain management is showing signs that hybrid work could just be a option for even the most hands on departments.

The same trends are being seen in customer service floor workers as innovation in automatic checkout technology and the rise in online shopping make even the most in-person job a remote one.